In June 2006 my husband Steve had a stroke that changed all of our lives. The prognosis was not good and the doctors told me that, if he survived, he may never walk, talk or think again. This was especially difficult as we had a baby and a five year old at the time.

I had a background in academic research so I set about reading everything I could find on stroke. Very early on I arranged for Steve to have acupuncture and I could see changes in his condition after each session. The next treatment I found was Stem Cell replacement therapy and then Hyperbaric Oxygen therapy followed by Music therapy. As time passed each treatment helped him more and more. He has made remarkable progress and now he is far more independent than anyone thought possible.

I started sharing my experiences with the caregivers I met in waiting rooms. Then I would see stroke survivors in the street and want to rush over to tell them about the rehabilitation treatments that could help them. I knew I had no choice, I had to make my research public and share it as widely as I could.

Although I knew a lot about research and I had learned a great deal about stroke, I am not a medical doctor. So I showed every piece of research to a medical professional and, where possible, to the researchers whose work I had read. In this way I tried to ensure that the research I presented was as accurate as possible. 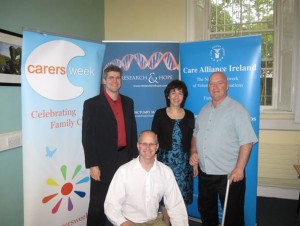 I did not create Research & Hope to give advice. I want to make life easier for people who find themselves in life changing circumstances. I was lucky enough to have research skills, but it still took me years to find rehabilitation therapies for Steve. This website is a resource so that you don’t have to dig through research journals and neurological papers. We have done the digging for you and we present the information in an accessible form. Despite limited resources, we try to update the website as often as possible. I hope you find it helpful.

In 2011 I founded Neuro Hero to develop apps so that people with speech and language difficulties can work on their rehabilitation at home or with their Speech and Language therapist. We also made short videos to teach key skills that can make communication easier with a loved one who has a communication difficulty. As a result of this work we received numerous awards including Arthur Guinness Fund and Social Entrepreneurs Ireland.

In 2016, following this success, I was invited to apply for a post-doctoral research Fellowship which was an ASSISTID/Marie Curie co fund. Over the next three years I developed a video based care plan. During 2019 I expanded this project into a Cloud based system of care for everyone, including those living with the most complex needs. This received a Commercialisation Grant from Enterprise Ireland in 2020 and I am now the Principal Investigator on the seamlessCARE digital care platform which is hosted in UCD