Aromatherapy uses a combination of essential oils and aromatic plants to produce a healing effect. Essential oils are extracted from flowers, fruits, leaves and barks. The treatment usually includes massage, which helps the highly scented oils to penetrate the deeper layers of skin. Aromatic oils can also be absorbed when they are mixed with water and evaporated into the air or inhaled directly. Their scents are said to have an effect on the limbic system in the brain, which is connected to emotion and memory. This is why aromatherapy is believed to promote relaxation and a more positive mood. Aromatherapists also argue that many essential oils have medicinal properties, including antiseptic, anti-inflammatory, anti-viral and regenerative qualities. 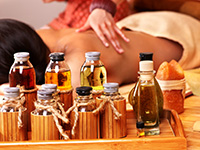 The therapy usually begins when the aromatherapist takes your medical history. Based on this consultation, he or she will mix the relevant essential oils with a carrier oil. Therapists frequently use a combination of massage and aromas, which are released into the air through oil burners or bundles of herbs. It is vital not to use essential oils neat, as they can burn the skin and sensitive body tissues. The first session often lasts up to two hours. Subsequent sessions are typically an hour long.