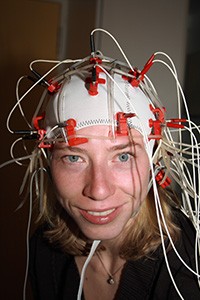 A Brain-Computer Interface (BCI) is a system that allows you to interact with a computer by means of your brain signals. The system typically consists of a computer, an amplifier and a skullcap. The BCI reads off brain signals and transmits them directly to a computer, bypassing the neuromuscular system through which we usually interact with the world. In other words, all you have to do is to focus on a task you wish to accomplish; the brain-computer interface ‘understands’ your intention on the basis of your brain activity and translates it into output on a computer.

For example, it is possible with currently technology to type letters into a word processor using thoughts alone. You simply concentrate on the letter you wish to type and it will appear on a computer screen.1 If you have a severe motor disability, brain-computer interfacing might allow you to do things that would otherwise be impossible, thereby enhancing your quality of life. You could potentially control a computer cursor, for example, or use a word processor to access the Internet and various forms of environmental control, such as light, temperature and entertainment. Another possible use relates to prosthetic limbs: if the BCI is connected to a prosthetic arm, you might be able to move that limb with your brain signals. A third area where brain-computer interfacing could also be used is in controlling a motorised wheelchair.2

It may even be possible to use brain-computer interfacing in a rehabilitative way, to restore motor functions.3 This is done by combining a brain-computer interface (BCI) technology with a mechanical brace to physically manipulate the stroke affected limb, along with the use of Motor Imagery (MI). MI refers to a process by which a person produces a mental picture of an intended motor task in the absence of physical motor output4; this process elicits corticomotor activation patterns similar to actual task performance. The concept is to use neurophysiologic signals during real-time motor imagery (MI) and to transform these signals into computer commands. These commands in turn drive the mechanical brace with the patient’s affected limb secured to it, allowing the brain to volitionally interact with its external environment. This process has the ability to affect neuro-plastic changes after a period of training in patients who have had a stroke, which is likely to facilitate functional gains during stroke rehabilitation.5

There are two different ways a brain-computer interface can record brain signals, each corresponding to a different level of invasiveness.6 The first – non-invasive – way uses a device that you place on your head like a cap. It reads off brain signals from your scalp. It is easy and safe but limited in terms of the frequency and resolution of brain signals it can pick up. The second – invasive – way requires implantation of electrode arrays, either at the cortical surface or within the brain. This method is better for picking up brain signals but there are concerns about safety, risk of tissue reaction and long-term recording stability. According to medical researchers Daly and Walpaw (2008), the kind of invasiveness suitable for you is dependent on personal circumstances:

‘At present, it seems probable that different recording methods will be useful for different applications, different users, or both.’7