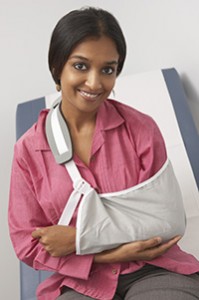 Constraint-induced Movement Therapy (CIMT) is typically used to help people who have a weakness on one side of their body. It is based on three main principles: first, you are not allowed to use your good hand or leg; this is restricted or constrained by a mitt, a splint or a sling. Second, you are forced to use your weak limb. Third, you have to use your weak limb all day every day, not just during the therapy. CIMT is grounded in the idea that the brain is ‘plastic’ and capable of change and reorganisation after a serious injury. Researchers at the University of Alabama have supported this by measuring changes in the structure of the brain that correspond to such increases in movement. They explain:

‘Structural brain changes paralleled these improvements in spontaneous use of the more impaired arm for activities of daily living. There were
profuse increases in gray matter in sensory and motor areas…’1

By using your weak limb, your brain is forced to make new connections and
create new brain maps. This approach has been successful for a number of
conditions, including cerebral palsy and stroke. The best selling author
Norman Doidge2 describes the therapy: 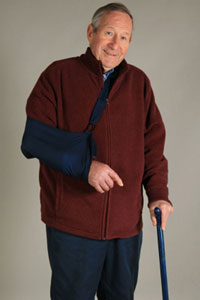 ‘Edward Taub developed a therapy for strokes which basically does the following: the assumption is that when you have a stroke, you lose cells in your brain and you try to move the affected limb, it doesn’t work, so you learn it doesn’t work. You stop using it and you use your good limb. Taub had the ingenuity to put the good limb in a sling or cast so you can’t use it and then incrementally train the affected limb … I spoke with Taub patients who’d had strokes 50 years before, and there were children there who had had cerebral palsy who were using this treatment and recovering their independence.‘3

The therapy can be individual or part of a group. You have to perform a series of exercises, tasks and games with the weak limb. These are repeated frequently and for many hours at a time. The exercises differ but might include walking on a treadmill, placing objects onto shelves, moving from sitting to standing, or balancing and climbing.4