Mental Practice (aka MP, Motor Imagery Practice and Visualisation) is based on imagining your body moving or performing an activity while you are at rest. For example, an athlete might visualise how he or she will run a race. There is a good deal of evidence to support the positive benefits of mental practice. It is commonly used to enhance sporting performance, as well as helping people with a range of neurological conditions, including spinal cord injury and Parkinson’s disease. ‘Motor imagery and mental practice are getting increased attention in neurological rehabilitation.’1 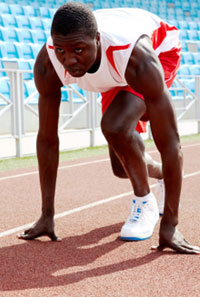 It may be difficult to believe that simply imagining an exercise can produce changes in your body, but it can. Visualising yourself performing an activity can cause electrical changes in your skin, as well as changes to skin temperature, blood flow and heart rate.2In one study, the participants imagined they were cycling. As they thought about riding their bikes faster, their heart rates increased at the same rate.3

There is also evidence to show that mental practice can causes changes to your mental map.4 This is based on the idea that our brains are ‘plastic’; in other words, we can change the structure of our brains with the right mental exercises. This type of research gives hope to people with all kinds of brain damage.

During mental practice treatment, you are often asked to sit or lie down with your eyes closed. The therapist might introduce some relaxation techniques, as being physically and mentally relaxed can make it easier to imagine each scenario. Treatments for people with neurological conditions typically last between 12 and 30 minutes. Mental practice is most effective for people who are able to visualise events clearly, e.g. if you can imagine your hand opening and closing, even if it is paralysed. Some studies have also shown that it is better to focus on familiar activities, rather than attempting to imagine new tasks.5