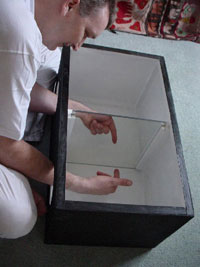 Mirror box Published with the kind permission of 23NLPeople.com

Mirror Box Therapy (or Mirror Visual Feedback (MVF)) was originally developed to help people deal with phantom limb pain, particularly in cases where a patient imagined that an amputated arm or leg was stuck in an uncomfortable position. It works by using the reflection of your good hand or leg to fool your brain into thinking that your missing hand or foot is moving. Similarly, with paralysis or muscle weakness (hemiparesis) after a stroke, looking at the reflection of your working limb may stimulate movement in your weak or paralysed limb.1Developed by VS Ramachandran, mirror box therapy is based on the idea that the brain is ‘plastic’ and able to change and reorganise itself after a serious injury. As you watch the mirror image of your movements, your brain begins to create new connections and map out new pathways. With practice, this therapy can, in some cases, stimulate movement in a paralysed hand, reduce the pain that remains after a leg has been amputated, and increase mobility in a limb weakened by stroke.2

The treatment is easy to set up. You can use a household mirror, or buy a mirror box. You sit at a table and hide your weak hand behind the mirror or inside the mirror box. You then move your good hand or foot in front of the mirror, so that it looks like your weak limb is moving. It is important not to look at the weak limb while you are doing this. Over time, your brain will try to restructure itself so that your injured limb moves at the same time as your good limb. Typically, you would practise this for a minimum of 10 minutes per day. Mirror box therapy is designed to complement an ongoing programme of treatment and should not replace any existing therapy.