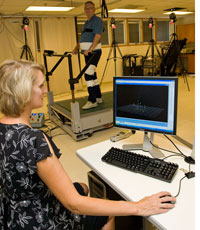 A split-belt treadmill features two separate belts running alongside each other, one for each leg. The two belts can move together or at independent speeds. If they move at independent speeds, this unusual situation causes your brain to receive an error signal. The brain and nervous system then use the feedback of this signal to adjust your walking pattern. Because each leg has to adapt to a different speed, it forces your legs to adopt individual stride lengths in order to keep balance. The cerebellum (a part of your brain that is important for motor control) recalls this new message even after the treadmill has stopped.1 In other words, your brain adapts to a peculiar situation on the treadmill and once you step off it, you continue to walk as you did on the treadmill. This form of gait rehabilitation is effective because the brain naturally adapts and modifies the walking pattern (or gait) based on stimulus. In this way, by repetition and instruction, the brain can ‘reawaken’ the old gait, at least for a short while.

In practice, split-belt treadmill therapy happens like this: if you have a defective gait, the difference in movement between your two legs is measured and analysed. Once the results are known, the split-belt can be programmed so that the leg with the shorter step-length is trained at the slower speed. This means that the leg that usually takes a shorter step will take an even shorter step, which forces the brain and nervous system to compensate for the exaggerated assymetry and adjust by taking longer strides. This will result in the difference in step-length becoming smaller.2 Once you are back on solid ground, you should see a difference in your walking pattern. The change in gait caused by the treadmill will result in a more normal step-length and, consequently, in a more normal gait.

We use cookies to ensure that we give you the best experience on our website. If you continue to use this site we will assume that you are happy with it.Ok