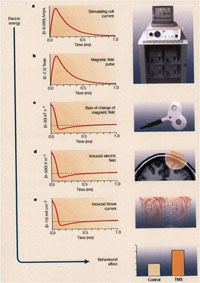 Transcranial Magnetic Stimulation (TMS) is a method of stimulating neurons in the brain using weak electrical currents. Rapidly changing magnetic fields produce ‘eddy currents’ that trigger brain activity. This allows researchers to map the functioning areas of the brain and the connections between them. Transcranial magnetic stimulation is primarily used to measure brain activity and help diagnose problems. However, there have been recent moves to use TMS therapy as a treatment for a range of neurological conditions. The therapy usesRepetitive Transcranial Magnetic Stimulation (rTMS). This is because repeating the magnetic pulses creates longer-lasting changes in brain function.

During the treatment, the researcher places electrical coils on the head. In general, there is little or no sensation. In most cases, the patient does not notice anything unusual, except the changes in his or her behaviour the researchers are creating. For example, the researcher can choose to shut down your ability to speak or to perform a task. The only pain associated with TMS therapy seems to be an occasional irritation of the scalp from the coils.

Transcranial magnetic stimulation is improving all the time. Experts have recently introduced ‘deep TMS’, which means they are no longer limited to the areas of the brain nearest the skull. 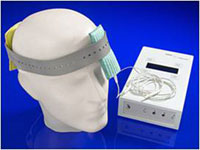