Virtual Reality Therapy (VRT) can help a wide range of disorders, from phobias to stroke. One version of virtual reality therapy helps people to deal with the pain of severe burns. The University of Washington is involved in developing SnowWorld, a virtual world of cold and ice, ‘designed to help put out the fire’ of intense pain as experienced by badly burned children and adults during wound dressings and other painful procedures.1 VRT can also help to tackle a range of phobias; for example, if you have a fear of flying, it is possible to walk through a virtual airport and take a flight on a virtual plane, all in the safety of a therapist’s office.2 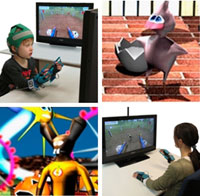 Another version of virtual reality therapy, called VirHab, is designed to help people with movement disorders, or even paralysis. It works by tricking the brain into thinking that part of your body is moving in a particular way. It’s like playing a video game where you are the character on the screen. If you have a paralysed arm, for example, you can see that arm moving on a simulation screen when you move a joystick or mouse. VirHab is also used to control chronic pain; you learn how to trigger the neurons in your brain that relieve it. Over time, the effect is permanent, as your brain changes its structure. Advances in VRT are promising. However, clinical trials have been limited. In 2008, we read:

‘So far, only a handful of patients have completed the trial, but preliminary results have shown a decrease in pain and in fear of pain, improvement in functioning, and better emotional and physical conditions in patients.’3

Research is ongoing. A study that commenced in 2009 hopes to show that VRT can ‘facilitate plastic changes in the brain, leading to reduced pain and improved function of the impaired limb’.4 There is also evidence that VRT can be used to help many areas of our lives, such as weight loss, stress reduction and depression.5